On the occasions I am invited to speak to a veterans group, I tend to start with these bites of humble pie: “Compared to many of you guys I was just a bit player. I was in the Army only four years, and my stint as a helicopter gunship pilot was cut short when my Cobra was shot down and injuries ended my Vietnam tour and my flying days.”

I need a larger piece of humble pie now as I fulfill my promise to deliver this review on “Direct Fire,” a new book written by A.J. “Tony” Tata (pronounced TAY-da). This is his eighth book. He is a high profile best-selling writer, and a frequent TV commentator on military and national security issues.

Jill Prouty, Peachtree City Library administrator, asked me to do this book review, and when I accepted I told her I would call it just the way I see it, so here goes. 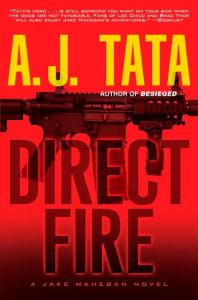 My cynical side means no disrespect when I say I am not impressed that Mr. Tata was an Army brigadier general; we all put our pants on one leg at a time. However, that he was an Airborne Ranger – a title earned by high achievement requiring extraordinary physical and mental stamina — with a ton of Special Ops combat experience in multiple conflicts, that earns him huge respect from me. I flew combat gun cover for Mr. Tata’s predecessors in Vietnam and came away knowing they were the bravest men I have ever seen.

Now even incorporating women, Special Ops teams would steal the breath of the clueless American public if they only pulled their nose out of their phone long enough to realize the extreme performance and high risks taken on their missions defending our country’s interests.

And that is the theme of Mr. Tata’s books – stories of the egregious threats posed by our enemies, and the extreme effort, skill and endurance of Special Ops teams that deal with it while we sleep peacefully, actions below the radar of our frantic media.

His writing style isn’t Shakespeare; he’s not trying to send high-brow readers into spasms of ecstasy over the subtle mastery of wordcraft. This is well-written, fast-paced action, a good read in which highly trained operators deal with America’s enemies in ways far beyond the limits of mere mortals like you and me.

I won’t give you a spoiler on the new book “Direct Fire” except to say you should read it for several reasons.

The story line will resonate with those of us who believe our national leaders — at least in the past — have been willfully blind and stupid to open U.S. immigration to a flood of Middle Eastern refugees without deep vetting.

Those of you with military experience will appreciate tough conditions in the story, and the selfless commitment, the sense of mission of the protagonists.

Those who most need to read this book include virtually everyone else, since naive eyes opened by a startling dose of reality would be a good thing for a public too far removed from our own military, and oblivious to enemies with a long history of plotting our destruction.

The story in “Direct Fire” is a bit of a wake-up call to an America determined to sleep in comfort under a bubble of protection and plenty while a war is ongoing behind the scenes between enemies with lethal intent far more deadly than 9/11, and the Special Ops teams constantly at work to kill the threats, like playing whack-a-mole with vermin.

Mr. Tata is a fine story-teller, and his writing style and fast pace ring true from his having been there. If you come away from this read feeling alarmed that we are actually at war and thinking sooner or later the cockroaches are going to burst our bubble, I won’t put words in Mr. Tata’s mouth but I would say welcome to the real and ugly world.

There is just one thing I would change if I had my hands on the controls of the story, but it would be a spoiler so I won’t tell you.

Mr. Tata will be speaking on the subject of “Cyber Warfare: The Internet of Things,” and how it relates to the story in this book, at the Peachtree City Library, 2 p.m. on Sunday, Jan. 7, free to the public, surely to be a book sale and signing event.

I do recommend this book to you, and if you’d like to compare notes …

[Terry Garlock lives in Peachtree City, and occasionally contributes a column to The Citizen. He can be reached at tlg.opinion@gmail.com.]