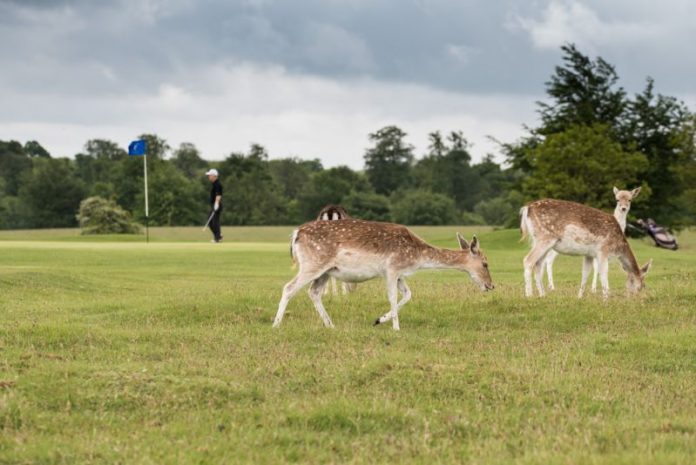 A decision by the board of directors of the Whitewater Creek Country Club homeowners’ association to have a number of deer killed and removed from the large subdivision property along Redwine Road has generated opposition by some residents and by others living in other areas of Fayette County. The HOA board subsequently issued a lengthy letter to all Whitewater homeowners explaining the rationale for the decision.

A petition objecting to the move, with signatures from Whitewater Creek residents and those from other locations in Fayette County, has been posted on https://www.change.org/p/concerned-citizens-against-deer-eradication-stop-the-white-water-creek-hoa-board-from-eradicating-the-deer?recruiter=166268739&utm_source=share_petition&utm_medium=email&utm_campaign=share_email_responsive

The petition entitled “Stop the Whitewater Creek HOA board from ‘eradicating’ the deer” objects to plans for baiting and shooting deer on the HOA property.

“This group opposes the use of lethal means to ‘manage’ White Water Creek’s deer population; believes the ban on discharging firearms within Fayette County subdivisions should be upheld; and believes the best way to regulate deer numbers is to let nature do the job unless the board can prove, under common law legal standards, there is a substantial likelihood the presence of the deer will endanger or cause injury to persons,” the petition said.

One of the homeowners who contacted The Citizen said the HOA meeting where the decision was made came with little notice.

Asked about the issue, HOA President Scott Fabricius provided a copy of the email sent to Whitewater Creek homeowners since many of those residents did not attend the recent town hall meeting where the topic was decided.

“For many months the board has been inundated with numerous complaints about safety and health concerns arising from the ever-increasing deer population within our community. This increase is the result of lack of predation and the fact that these deer generally produce multiple offspring each year. In addition, they are attracted to golf course communities like WWC,” the email from the board said.

The email noted that several homeowners have contacted the HOA board to advise that there is significant misinformation being spread throughout our community about the board’s decision to follow the deer management plan recommended by the experts at the Georgia Wildlife Services Program.

“While Whitewater Creek does not conduct its business on such social media sites as Nextdoor, the board wanted to provide the facts to our residents who might not have attended the town hall meeting held a couple of weeks ago,” according to the HOA board.

“Deer-vehicle collisions are a major concern, and we have received several reports of near-misses. It is not unusual to see deer standing or running on our streets,” the email said. “One person has suggested that if everyone drives at 15 mph that we can probably avoid such accidents. We can’t even get people to comply with our posted 25 mph speed limit.”

The email also cited concerns about the introduction of disease-generating ticks present on deer and the susceptibility of deer overpopulation to malnutrition and poor overall health.

“Many residents have complained that dwindling food resources has led to several deer searching for food on their patios,” the email said, adding that over-browsing by deer can lead to the reduction of other wildlife species and result in low species diversity.

“While deer hunting is legal in Georgia, and local hunters had volunteered to assist in population control, the Board wanted to explore all options before deciding on the correct management plan,” the email said. “The board met with the experts from the Georgia Wildlife Services Program who work under the United States Department of Agriculture. They have visited our community on more than one occasion and explained the various options.”

Outlining the options for controlling the population, the board said installing a 10-foot fence would not resolve the issue for several reasons. Nor would the “trap and transfer” method because it is not legal in Georgia.

“The Georgia Wildlife Services Program determined that the best option for WWC was population management. However, because of the residential nature of our community, they did not recommend regulated hunting or managed hunts,” the board said. “Instead, they recommended professional deer removal conducted by the USDA APHIS Wildlife Services under a depredation permit. This was the most effective option utilized by golf course communities throughout our state. Wildlife Services is permitted to use specialized equipment and methods such as high-powered rifles fitted with noise suppressors; infrared and night vision technologies for identification of safe shooting opportunities and to increase the ability to locate deer; and other methods. It should also be noted that deer harvested by Wildlife Services provides venison for charitable donation and biological data that assesses overall deer herd health.”

The email stated the expectation that some residents will disagree with the board’s decision. To that end, the email said, “Please be advised that no one is required to allow Wildlife Services onto their property. The professionals from Wildlife Services will only utilize those properties where the homeowner has provided a signed authorization.”

Sheriff: Tornado passes over Fayette, some power outages, but nobody hurt