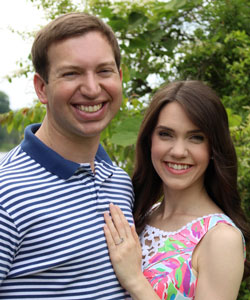 Kirk and Becky Hall of Brooks announce the engagement of their daughter, Caroline Shelby, to Brandon Paul Breslin, son of Cher and Paul Breslin of Dunwoody.

The bride-to-be is the granddaughter of Frances and Jerry Brown of Milton, Fla. and the late Bill Holland of Longwood, Fla., and Janice and George Hall of Evergreen, Colo.

The groom-to-be is the grandson of the late Elizabeth and John Breslin of Huntington, N.Y., and Joan and the late Roger Seith of Rochester, N.Y.

Brandon is a 2014 graduate of the University of Georgia where he was a member of Delta Sigma Phi Fraternity. He holds a bachelor of business administration degree in management information systems.

A spring wedding at Callaway Gardens is planned.

After their honeymoon in Turks and Caicos, the couple will reside in Georgia.