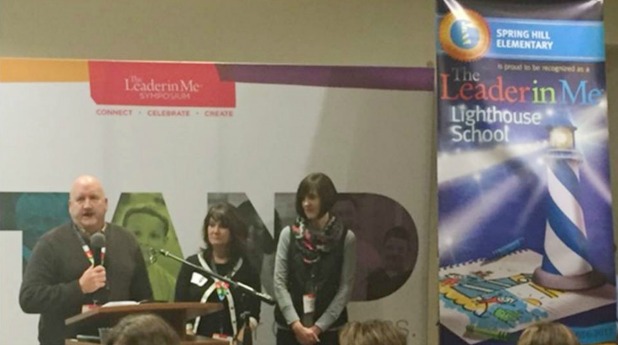 FranklinCovey’s “The Leader in Me” program has awarded a Fayette elementary school with its highest and most coveted honor.

Spring Hill Elementary is the first school in the county, and one of just three in Georgia, to earn the “Leader in Me Lighthouse School” designation. Currently, there are 151 schools in the United States and 174 worldwide that have been awarded Lighthouse School status.

FranklinCovey, a worldwide consulting and training leader, awards The Leader in Me Lighthouse School designation to schools with a well-rounded leadership model that incorporates certain criteria critical to the development of a leadership culture.

To earn Lighthouse School status, schools must meet nine standards that include a school Lighthouse team to oversee the implementation of the model, a school environment that reinforces the leadership model, integration of leadership language into daily curriculum and instruction, collaboration of staff to build leadership in classrooms throughout the school, meaningful leadership roles for students, parental involvement supporting the leadership model, hosting school events to share the leadership model with other schools and the community, goal tracking at the student, classroom, and school-wide level, and measurable improvements as a result of implementing the Leader in Me process.

A review team from FranklinCovey evaluates schools for the designation. FranklinCovey co-founder Stephen Covey authored “The 7 Habits of Highly Effective People” and “The Leader in Me.” The books are the basis of the Lighthouse leadership program.

Spring Hill officially received its Lighthouse School banner at the Leader in Me Symposium held in Atlanta in February. Lighthouse schools serve as models of leadership, and as mentors to other schools.

Spring Hill Elementary Principal Randy Hudson accepted the Leader in Me Lighthouse School designation at a symposium in February as, from left, teachers Shann Kimbell and Christina Cayer, both members of the school’s Lighthouse team, looked on.