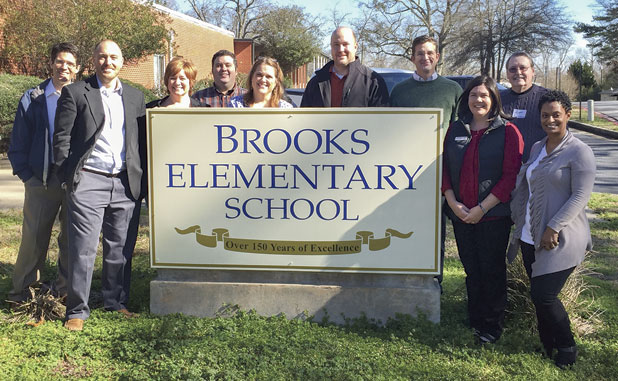 With Liberty Tech, Brooks gets its school back

The Brooks community will have a school again in the 2016-2017 school year. The difference is that the former elementary school will open as Liberty Tech, Fayette County’s first state-chartered public school. The Fayette County Board of Education (FCBoE) on Jan. 19 approved a three-year lease of the former Brooks Elementary School.

“The Liberty Tech Governing Board is thrilled and humbled at the level of confidence the FCBoE has placed in our educational model. This is not some after-thought, but the result of months of negotiations and countless conversations. They have done their due diligence,” said Liberty Tech board member Christi McCully. “By allowing us to lease Brooks Elementary School for three years, they are giving us the opportunity to serve 282 3-8 graders from Coweta, Spalding, Henry, Fulton, Clayton and Fayette while taking a cost off their books which provides extra funds for the students in Fayette County Schools. It is a win-win.”

For the Brooks community, the opening of Liberty Tech will be a kind of homecoming. The Fayette County Board of Education closed Brooks Elementary in June 2013 along with three other county schools in a cost-cutting move.

“This is a new day for our community. We’re just thrilled,” Brooks Mayor Dan Langford said with unmistakable excitement in his voice. “I haven’t heard of anyone who didn’t want the school here.”

McCully said the new public charter school was approved last summer and will open in the 2016-2017 school year for grades 3-8.

“Common sense dictates that most students thrive in smaller environments where they are more likely to get one-on-one attention and are less likely to fall through the cracks. For that reason, Liberty Tech will start with only two classes per grade, but will never grow larger than three,” McCully said. “The charter school’s inaugural year will include 282 children in grades 3-8, year two will include 442 students in grades K-9, with the school adding one grade per year until it reaches grades K-12 capacity of 632 students.”

Registration will be open until Feb. 15, with a lottery to be held on Feb. 20. McCully on Monday said approximately 1,000 students from nine Georgia counties have pre-registered, along with students from four states and two countries. If successful in the lottery, McCully said the parents of the out of state and foreign students have indicated that they will move to Fayette County so their child can attend.

So what makes Liberty Tech different? The most obvious is the educational model and the length of the school year.

“The charter school governing board believes that as columns support the roof of a structure, so too does the educational model of Liberty Tech require three columns to be in place in order for true learning to occur,” McCully said.

1. Virtue, supported by Aristotle’s Cardinal Virtues and a year-long, K-12 etiquette program from the American School of Protocol.

“The educational model is a merger between Classical Education, which teaches students how to think, not what to think, and science, technology, engineering, and math (STEM) which equips student for the future,” said McCully.

McCully said the model is placed on a 210-day school year to promote mastery and provide the time for students to investigate a wide variety of topics to help them determine a career path.

“At Liberty Tech, theory is blended with hands-on learning thanks to the investment of many community partners,” said McCully. “Many partners have signed on to provide professional development for teachers making it possible for Liberty Tech to offer exciting courses that integrate numerous subjects.”

Liberty Tech recently announced the hiring of its principal, Mike Stewart, a Fayetteville resident and assistant principal at The Museum School of Avondale Estates.

The school board on Jan. 19 approved the three-year lease at $6,000 per month. Liberty Tech will lease the school in “as is” condition and will be responsible for all utilities, maintenance and repairs.

The school board in 2014 turned down a proposal that would make the charter school a part of the Fayette County School System. Liberty Tech was approved subsequently by the Georgia Charter Schools Commission.

“I think this is a home run for Brooks and Fayette County,” Langford said. “I’m excited about the energy level it will bring to Brooks. There had been a school on the site since 1917 and a school in Brooks since antebellum times.”

Interested in having your child attend the new Liberty Tech Charter School in Brooks?

The new state-chartered public school, approved by the Georgia Charter Schools Commission, will begin operations for grades 3-8 in the 2016-2017 school year.

Those interested should visit www.libertytechcharter.org for registration details and more information about the school.

Registration will be open until Feb. 15, with a lottery to be held on Feb. 20.

The public charter school’s inaugural year will include 282 children in grades 3-8, while year two will include 442 students in grades K-9. The school will add one grade per year until it reaches grades K-12 capacity of 632 students.

The school will serve students from across south metro Atlanta, including Fayette County.

Featuring a 210-day school year, the educational model is a merger between Classical Education and science, technology, engineering, and math (STEM). — BEN NELMS