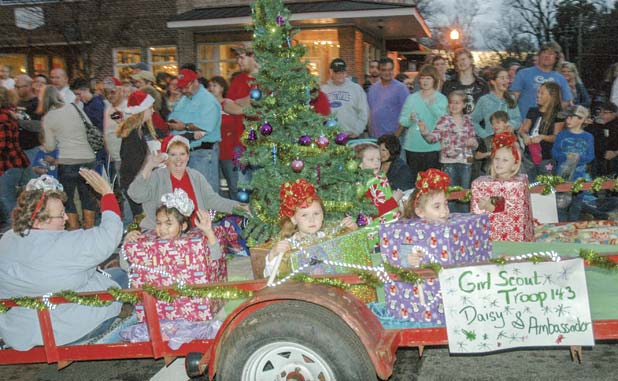 A mainstay in Senoia during the Christmas holiday season, Light Up Senoia will be highlighted on Dec. 5 with the parade down Main Street. The parade begins at 5:30 p.m.

The festivities in Senoia will begin at 4 p.m. and run until 8 p.m. A sampling of what’s in store for city residents and the many visitors to Senoia includes Santa’s workshop, a food court, plenty of Christmas entertainment and the Christmas tree lighting after the parade.

It seems that Santa’s detour to Senoia will be followed on Dec. 6, according to an anonymous source, with a stop in Tyrone in time for the annual Christmas Tree Lighting and Holiday Celebration in Shamrock Park on Senoia Road.

Tyrone’s annual introduction to the Christmas season begins at 4 p.m. and runs until 8 p.m.

Santa will arrive at 5:15 p.m. on his horse-drawn sleigh and, before the day is over, will hear Christmas wishes from the kids.

Free sleigh rides around the park will begin after Santa arrives.

Activities will continue with the Burch Bears, Artisia’s baton twirling, the Sandy Creek Jazz Band and the Flat Rock Chorus.

The Christmas tree will come to life just before 7 p.m. and will be followed by performances from several dance companies.

Throughout the evening, members of the always active Fayette Daybreak Rotary Club will serve complimentary cookies and cocoa.