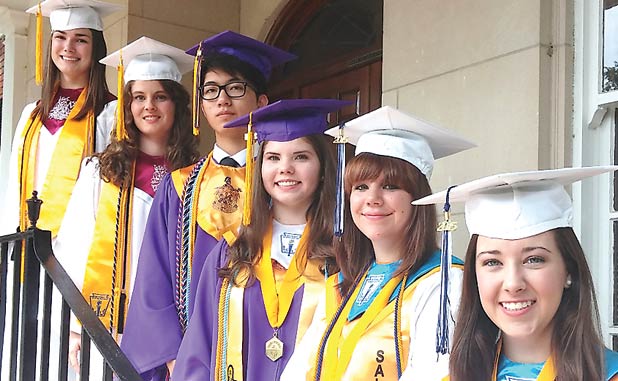 The four-year graduation rate for Coweta County high school students rose to 86.3 percent in 2015, an increase of four points over the 2014 rate. The graduation rate exceeds the state average of 78.8 percent.

The Coweta County School System’s on-time graduation rate of 86.3 percent was approximately 7.5 percent higher than the state of Georgia’s average, which also rose significantly in 2015. The state’s graduation rate was 78.8 percent in 2015, an increase of four points from the year before, according to a gradation report released by the Georgia Department of Education (DOE) on Monday.

Georgia calculates high school graduation rates using a new formula – known as the four-year adjusted cohort rate – now required by the U.S. Department of Education. The rate follows the students who enter high school together as freshmen (the ‘cohort’) who then go on to earn a diploma within four years. The calculation of the rate adjusts for student transfers.

In contrast, Georgia’s former graduation rate calculation defined the cohort upon graduation, which may have included students who took more than four years to graduate.

Jackson said the Coweta County School System’s graduation rate has been rising for several years as well, and Coweta’s high school principals attribute rising graduation rates to a number of factors, including use of data and careful tracking student performance, working closely with students to advise them and identify their individual needs and offering multiple opportunities for student support, remediation and advanced opportunities.

“Administrators and teachers identified students who needed help early, built relationships with students and provided support for them, involved parents, and held them accountable,” said Allen.

“There was a lot of hard work by teachers and students,” said Evan Horton, the school system’s director of student services who was principal at East Coweta High School through 2015. “Everyone really bought in to what we were asking them to do, and it got to a point where they didn’t want to let each other down.”

Allen and Horton said that East Coweta High’s Communities in Schools chapter built a student mentorship program for students around the effort that helped organize and drive the effort, and which supported students with community resources if necessary.

“Communities in Schools put forth an intentional effort to help students graduate, and we appreciate that support,” said Superintendent Steve Barker. “In our school system’s belief statement, we recognize that we must continually improve as a system. Our graduation rate is an area that we have shown significant improvement for several years. We are proud of our students, and proud of the hard work on the part of their teachers, counselors and administrators, and members of our community.”

Barker added that the Coweta’s rising graduation rates are attributable to a number of efforts throughout the school system, beginning in elementary schools.

“It starts the moment a student walks into a Kindergarten or pre-Kindergarten classroom,” she said. “Our graduation rate is evidence of the success of many strategies and opportunities for making students successful, in our elementary, middle and high schools. It starts the first day of a child’s school experience, when teachers and administrators make a commitment to that child, and that commitment follows them through all 12 years.”