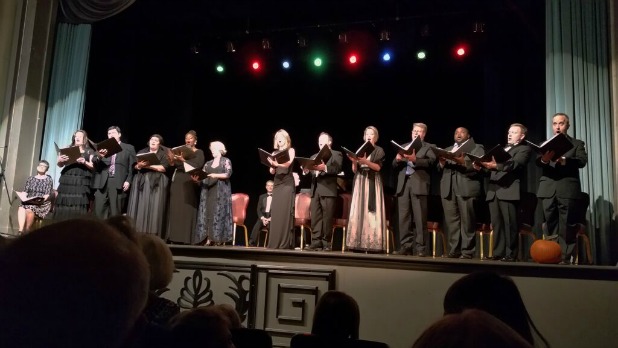 It was a packed house at Wadsworth Auditorium Saturday for the “Rags to Riches” show mounted by Newnan Cultural Arts Commission.

The new fall event, the brainchild of artistic director and soprano Courtenay Budd, brought an evening of song and musical theater to the historic hall. Featured was Warren Martin’s comic oratorio “The True Story of Cinderella.”

The arts commission is working to expand programming at the 1939-era, Art Deco-style facility now that the city’s police department has moved down Jefferson Street to the newly-built public safety complex.

“It shows we can pack the auditorium on a weekend when there is no Georgia football,” joked Budd as she introduced the operatic program. It was a bye week for the Bulldogs.

In recent years Budd has taken the reins of the “Friends of Wadsworth” spring chamber music series, a continuation of the popular concerts originated by auditorium namesake Charles Wadsworth some two decades ago.

“Friends of Wadsworth” will return for spring 2016 with a March 12 concert date. Budd announced that the lineup will include internationally-known violinist Chee-Yun with a talented lineup of musicians for the evening of chamber music.

Saturday’s evening of opera and song included a first half of selections on a “Rags to Riches” theme from such composers as George Gershwin, Richard Rogers, Stravinsky, Menotti, Offenbach, Verdi and Rossini. Cast members strolled on and off stage as the performances blended into a seamless medley.

Budd joined world-traveled soprano Indra Thomas of Atlanta as they portrayed courtesans, singing the Barcarolle from “Les contes d’Hoffmann” by Offenbach. Thomas also performed “All That Gold” from Giancarlo Menotti’s “Amahl and the Night Visitors” that will be returning during the holidays to Newnan’s Centre for Performing and Visual Arts.

Budd, Thomas and Newnan’s own Sarah Taylor showed their comic side, flashing jewelry and bold costumes in “Glitter and Be Gay” from Leonard Bernstein’s “Candide.”

The cast came together to end the first half with the Act I finale from Rossini’s version of “Cinderella,” “La Cenerentola.”

The highlight was the second-half performance of Martin’s “Cinderella” with the cast of 12 internationally-known and talented local voices along with pianist and musical director William Lewis, narrator JoAn Kinrade and Newnan Mayor Keith Brady chiming the midnight hour as Cinderella leaves the ball.

Budd earned a Master’s Degree at Westminster Choir College of Rider University in Princeton, NJ, where Martin’s 1955 “Cinderella” is a tradition for welcoming incoming freshmen. Faculty enter the stage dressed in formal gowns and tuxedos, and line up on the stage as if they are about to deliver a sacred oratorio. What follows is almost an hour of singing hilarity. Saturday night’s rendition was no exception.

“Warren Martin was the conductor of the Westminster Choir, and unfortunately this wonderful work is rarely heard outside venues with Westminster connections,” said Budd. “I have wanted to present it for a very long time, always dreaming up casts of my friends.”

Seven of the talented singers in the “Rags to Riches” event had Newnan connections, including Budd herself, Budd’s brother and sister-in-law Candler and Emily Budd, William Killmeier, and hometown girls Kat Duncan, Erin McGraw and Sarah Taylor. Continuing the family connection, Ms. Stallard is Budd’s cousin.

Newnan’s Killmeier, as Budd, graduated from Westminster Choir College. Budd noted that his time at Westminster overlapped with Martin’s time there. Killmeier went on to careers with the U.S. Army Band in Washington, DC and later 13 years as an opera singer across Europe where he had more than 60 leading roles. He is now an associate broker with Keller Williams in Peachtree City.

Newnan audiences may know Candler and Emily Budd from the popular performances of their original comedy cabaret series, “Craigslist Chronicles.” Emily Budd is an adjunct professor at LaGrange College and Candler Budd is a regular theater, standup and improv performer with such credits as half the townspeople in “Greater Tuna,” “A Tuna Christmas” and “Red, White & Tuna” as well as “Anything Goes” and “Chicago.” They have appeared in Atlanta Lyric Theatre productions in Marietta: Emily as Jenny Lind in “Barnum” and Candler as Smee in “Peter Pan.” The couple also had roles in the recent Newnan Theatre Company Production “Into The Woods.”