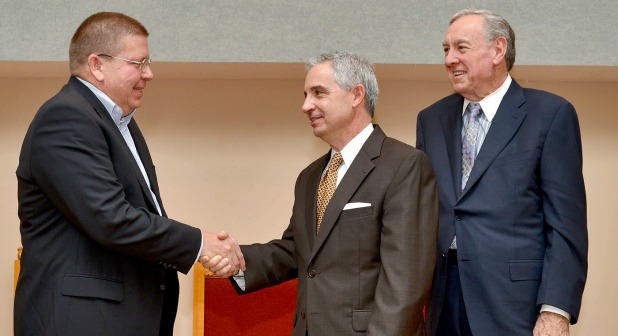 The Board of Trustees of Christian City, Inc. has announced the appointment of a new president/CEO, Len Romano, to begin service Dec. 1. Robert Crutchfield is retiring after serving in that post for more than 22 years.

Board of Trustees Chairman Michael Johnston introduced Romano to the residents of Christian City at a Sept. 30 town hall meeting on the campus and thanked Crutchfield for his service.

“We are blessed to have had Bob’s dedicated servant leadership for more than two decades,” said Johnston. “He certainly lives out the Christian City motto of ‘loving people… loving people’ in a welcoming community of faith.”

Romano has been the president/CEO of YMCA of Greater Omaha since 2011. His 38-year career with YMCA began in his hometown of Washington, DC, when he joined the program staff while working his way through college. He advanced within the YMCA organization serving as CEO in Connecticut and Denver prior to taking the helm in Omaha. Romano and his wife, Jana, have been married for 25 years and have two adult sons.

The Board of Trustees search committee selected Romano from among hundreds of nationwide applicants for the CEO post.

“Len is uniquely qualified to assume the responsibilities of the complex and multi-disciplinary functions of Christian City in that he has great experience as well as an MBA in business and marketing and a Master’s of Divinity degree,” said Johnston.

During the town hall meeting, Crutchfield expressed his gratitude to the residents and staff of Christian City.

“While I deeply regret that I will not have more time to serve with you, I am grateful that the Lord has brought a well-qualified leader to serve Christian City. God has served us faithfully for 50 years, and we know He will continue to do so,” Crutchfield said.