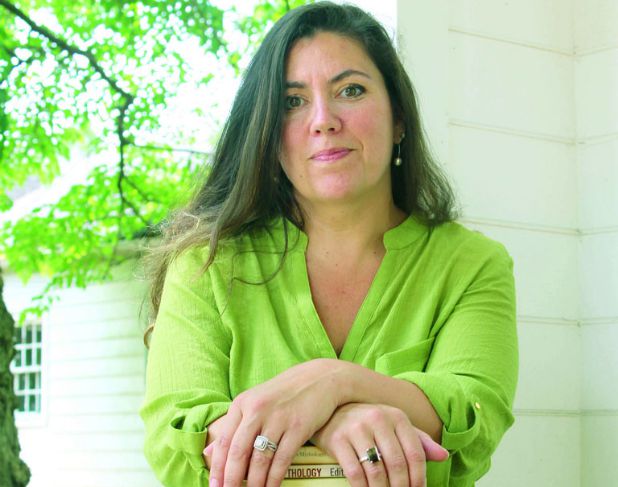 Mayhayley Lancaster, “Oracle of the Ages,” was an American lawyer, political acitvist, midwife, fortune teller, and teacher best known for having participated in two of Georgia’s most high-profile murder trials, involving defendants Leo Frank of Marietta and John Wallace in Coweta County.

Writer and teacher Melissa Dickson Jackson of the University of West Georgia will speak about Lancaster’s life and work at a special event this weekend at the McRitchie-Hollis Museum, 74 Jackson St., Newnan, GA, beginning at 1 p.m. (Also part of this event: have a psychic reading from Crystal Lynn, courtesy of the historical society. Readings begin at 1 p.m.)

The event is part of “The Reel Past,” a series of events celebrating Coweta County’s connection to Hollywood. Lancaster’s testimony was a key component of the 1948 John Wallace trial, which was made into a popular TV movie in 1983 starring Andy Griffith and Johnny Cash. The “Reel Past” series of events is sponsored by the Georgia Humanities Council and the Newnan-Coweta Historical Society.

Born Amanda Mayhayley Lancaster, she grew up in Heard County, where she lived for most of her life. Lancaster was one of the few public voices in Georgia to defend Leo Frank. Thirty-two years later, in 1947, the 71-year-old Mayhayley Lancaster took part in the Wallace trial, later described in the book “Murder in Coweta County.” In the 1983 same-titled, made-for-TV movie, she was portrayed by 54-year-old June Carter Cash, whose husband, Johnny Cash, played the key role of Sheriff Lamar Potts.

Lancaster ran for the Georgia legislature in 1926, the first woman to do so. She ran on a platform advocating roads and railroads into rural counties, public schools, and the passage of a law that mandated that doctors must deliver babies regardless of the family’s ability to pay fees. She did not win. Mayhayley Lancaster died Nov 22, 1955, one month after of her 80th birthday. She is buried in the cemetery at Caney Head Methodist Church. In addition to her legal, political and educational activities, she was also described as a noted fortune teller, numbers runner and self-proclaimed “Oracle of the Ages.”

Melissa Dickson Jackson, an instructor at the University of West Georgia, is a poet and feature writer. She has published two collections of poetry, Cameo (2011) and Sweet Aegis, Medusa Poems (2013). Recent poems can be found in Shenandoah, North American Review, Bitter Southerner, Southern Humanities Review, Cumberland River Review, Southern Women’s Review, Literary Mama, and Gravy from the Southern Foodways Alliance at the University of Mississippi. She is a frequent contributor to Newnan/Coweta Magazine.