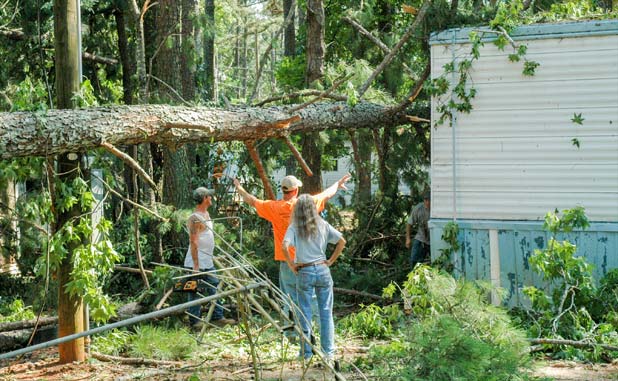 A microburst that hit the Whispering Pines Mobile Home Park on Senoia Road in Tyrone during the late afternoon hours of June 24 destroyed 11 homes and damaged 14 others but resulted in no deaths or serious injuries. Nearly a week after nature’s onslaught, tenacious residents are making the best of a bad situation as faith-based community partners and others continue to assist those in need.

It was a microburst with winds of 80-90 miles per hour that ripped through the tree-filled area, according to National Weather Service representative Dave Nadler who was on site to assess the damage after reviewing radar data. That preliminary finding was included in a NWS bulletin issued later Wednesday night indicating that Whispering Pines was the area hardest hit in the larger area between Tyrone and Peachtree City where trees were snapped or uprooted. The bulletin said 20-30 large pine trees were snapped or uprooted at Whispering Pines.

Fayette County Fire and Emergency Services Division Chief and EMA Director Pete Nelms said 11 homes were destroyed and another 14 damaged in the microburst event that accompanied a thunderstorm.

As if by some miracle, and despite what looked like a war zone, there were only minor injuries reported after the microburst first struck at approximately 5:40 p.m., officials said.

Chris Folds was standing in the doorway calling his cat when “the storm came out of nowhere.”

Chris, his girlfriend Stacy Johnson and their daughter ran out of the house after one tree crashed through the roof into a bedroom and another crashed into a second bedroom, Stacy said.

“We ran out and the third tree fell,” she explained. It was that final blow that completed the utter destruction of their home.

Folds on Thursday said he found his missing cat safe and unharmed under a bed in the demolished home.

Just up the street, Stephanie Williams and Lisa Allen saw nature’s wrath unfold. The wind was blowing so hard it was difficult for Lisa to open the front door. Then looking out a window, Stephanie saw the trees blowing back and forth followed by the power going out.

It was then that she heard screams coming from her next door neighbor’s house.

“We ran into her house and found that a tree had crashed into the middle of the house,” Stephanie said.

Stephanie and Lisa found the woman unharmed and were able to locate her cat and bird, both also unharmed.

A short distance away, the home of Isaiah Jarvis, Destiny Davis and their young daughter was also hit by a falling tree. Waiting momentarily to see what would transpire with trees crashing onto and around the house, the three grouped by the front door to have an escape route if needed.

In all, the scene Wednesday afternoon was surreal – so many homes damaged or destroyed, trees and limbs everywhere, power lines hanging on homes and off fallen trees like tinsel off a Christmas tree.

And yet there was something else. It was the people. Sure, many were shaken as would be expected. But it was more. They were helping each other, doing their best with no supplies or equipment, to make sure their neighbors were cared for.

Morgan offered her thoughts on what had unfolded and how so many people remained calm and compassionate in the face of a personal disaster.

“Everybody is worried about everybody else, running around checking on and helping each other. Churches all around are praying and asking what they can do,” Morgan said late Wednesday afternoon. “It’s like a family here. I hurt for all of them, but God is in control and God kept us all safe.”

Fire crews from Fayette FES arrived within minutes of the weather event being called in. They were soon joined by crews from Coweta-Fayette EMC, Tyrone Police and church groups to begin clearing the area while Fayette EMA assisted those who suffered damage to their homes and worked with others who lost everything. A crew from Harps Crossing Baptist Church was cutting fallen trees as night began to fall. They were joined in the clearing by Tyrone Councilman Ryan Housley.

It did not take long for additional help to begin arriving. Many of those were community partners with the Fayette County Faith-based Disaster Network that includes numerous churches and nonprofits. The network had been alerted and was being organized, Nelms said just after 6 p.m. on Wednesday, adding on Monday that the work at Whispering Pines continued for the next Several days. By Saturday, significant clean-up work had been accomplished, Nelms said.

Nelms said the Red Cross was also on-site Wednesday night, arranging to shelter five families in motels for three nights. Others stayed with family or friends or had their lodging expenses paid by insurance carriers.

Other community partners poured in to help with the efforts and EMC had most power restored by Thursday morning, said Nelms, adding that EMC crews did an outstanding job.

“The Real Life Center really came through. They brought 75 cases of water and others in the faith-based community brought food boxes of non-perishable items for every individual and family,” said Nelms. “This is why we created a faith-based network. This is all part of the emergency management system.”

Speaking Monday, Morgan said the assistance efforts from so many across the community continue to pour in.

Assessing the response and offering his perspective from the standpoint of the Georgia Emergency Management Agency, Fayette County resident and GEMA Director of Operations Charlie Dawson was on-site Wednesday and noted Fayette’s action on behalf of affected residents.

“Fayette County’s response was very aggressive. Pete (Nelms) was making all the right calls to EMC, the Red Cross and others,” Dawson said. “The county has done an admirable job in training faith-based groups to respond to emergency situations. And Fayette is doing a great job in getting information to the residents.”

A walk through the mobile home park easily shows that path of the microburst and the destruction it brought. Winds of 80-90 miles per hour took out trees and homes nearest to the park’s entrance on Senoia Road.

Nelms said Fayette County is no stranger to microbursts and straight-line wind events. Similar weather events occurred on County Line Road several years ago, along Ellison Road in the 1990s and on Banks Road in the 1980s.