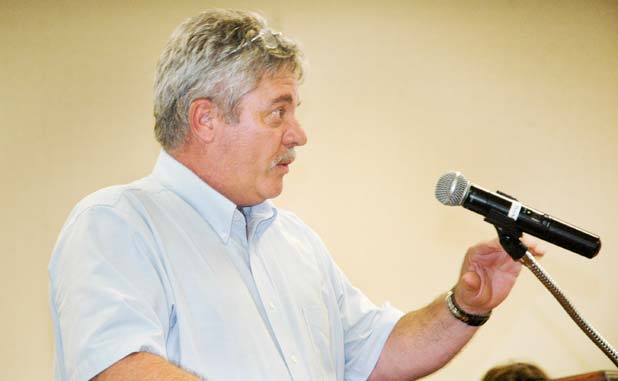 A consensus of the Peachtree City Council at the June 22 budget workshop has staff directed to submit a budget that has no millage rate increase, no staff raises and the use of either $769,000 or $1.3 million in reserves to balance the FY 2016 budget. The budget is expected to be adopted in late July.

Interim City Manager Jon Rorie began the presentation noting the city’s budget policy and reviewing revenues streams. He recommended a $33.5 million budget that would have no millage increase until 2020 when the millage rate would increase by .25 mills. The budget would maintain the 25 percent reserve amount in the general fund averaging 33 percent in 2016 and diminishing over time to 27 percent in FY 2020.

Among the variables in the $33.5 million budget recommendation were eliminating the proposed 2.1 percent employee cost index increases totaling $303,000, funding the detective position at $79,200 and allocating $2 million for paving. The budget would be balanced by using $769,598 in reserves.

Later in the council discussion, the idea surfaced to allocate $2.5 million for paving by using $1.3 million in reserves. If approved, that would increase the budget to $34.08 million and leave 31 percent in reserve.

If adopted, that budget would leave 30 percent in reserves for FY 2016 and would require a projected .5-mill increase in FY 2018.

In all, the council consensus was to adopt a budget that would carry no millage increase, include no staff pay increase, approve the hire of another detective and allocate the use of $769,598 in reserves.

Councilman Eric Imker during the discussion advocated for reducing the millage rate by .25 mills, a $450,000 savings to taxpayers. That would put the budget at $33.37 million with 32 percent in reserves after using $1.08 million to balance the budget. Down the road, a .25-mill increase would be needed in FY 2018.

Consuming a large portion of the discussion was street resurfacing, a significant issue given that the city has 179 miles of streets, of which 38 percent are rated below an 80-rating that signifies needed work.

Paving costs are $315,000 per mile, Rorie said, adding that it would take $2.5 million to resurface approximately eight miles.

It was noted by council that the past practice of funding street resurfacing activities by using the former countywide SPLOST (special purpose local option sales tax) revenues is no longer possible since the SPLOST ended several years ago and those funds are exhausted.

Imker suggested that a new SPLOST could be put on the ballot, though some on the council questioned whether county commissioners would entertain such a move. Imker said the city could pave 25 miles per year if a SPLOST was approved.

Councilman Mike King during the discussion said the city during the years of the recession had neglected street maintenance.

“We’re just marking time. We need to take our political hats off and do the paving we need and do what’s right for the city,” King said. “We’re constitutionally required to do so.”

Councilman Terry Ernst agreed, saying, “Sooner or later we have to pay for (resurfacing). It’s not going away.”

A countywide SPLOST initiative in November 2013 failed with 57.2 percent of voters opposed. Peachtree City had planned to use its projected $14.5 million share to fund road and cart path resurfacing.

Another issue during the discussion dealt with an increase in the cost of golf cart registration. The current registration rate that averages approximately $2.40 per year could increase to $45 every three years if approved.

The city’s budget year begins in October. The council will hold another budget workshop on July 7.