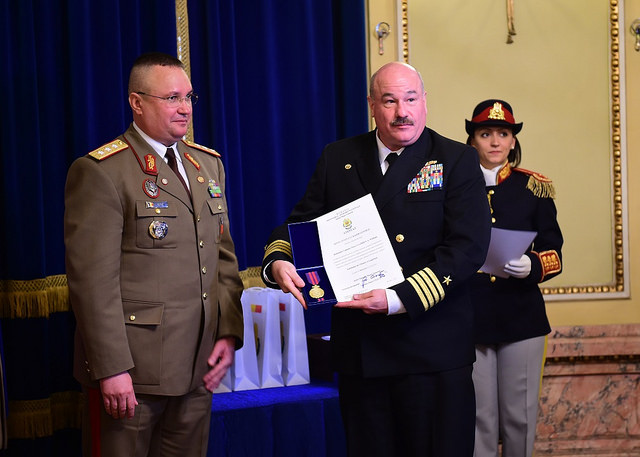 Capt. William A. “Bill” Garren, a Newnan resident, was recently awarded a medal by the Romanian military for his service in command of Naval Support Facility (NSF) Deveselu.

Garren was awarded the Emblema de Onoare a Logisticii (Logistics Emblem of Honor) for his leadership during NSF Deveselu’s construction.

Established in October, 2014, NSF Deveselu is home to an Aegis Ashore Missile Defense System, scheduled to become operational in 2015. Aegis Ashore is a land-based version of the Aegis Weapons System currently deployed on U.S. Navy ships, although it deploys only the SM-3 missile for ballistic missile defense.

A veteran of 38 years’ naval service, Garren said he accepted the award on behalf of the diverse team of military, civilians and contractors who are working to complete NSF Deveselu and make its tenant command operational.

“That’s really what it came down to – all the different parts,” Garren said. “It’s the security force, the command staff, the Seabees, the U.S. Missile Defense Agency, and the Army Corps of Engineers. Once we gelled together, we became this team. I accepted the award for everyone that has worked on this base.”

Garren lives in Newnan with his wife Debbie and son Korey.

Garren was awarded the Logistics Emblem of Honor by order of Lt. Gen. Nicolae Ciuca, chief of the General Staff and the highest-ranking military officer in the Romanian Armed Forces (equivalent to the Chairman of the U.S. Joint Chiefs of Staff). The award was bestowed as a sign of appreciation for exemplary efforts, commitment to excellence, and technical expertise in support of missions by the Romanian military logistics structures, particularly by the 99th Military Base. The 99th Military Base, co-located with NSF Deveselu on a former MiG fighter base, is subordinate to the Joint Logistics Command of the Romanian Armed Forces, and is therefore regarded as a logistics base. The award ceremony was hosted by Lt. Gen. Catalin Zisu, commander of the Romanian Joint Logistics Command.

Garren enlisted in the Navy in 1977, and rose to the rank of Chief Petty Officer as an operations specialist. He was commissioned in 1991 through the Limited Duty Officer (LDO) program, and served in staff and shipboard positions, including joint tours with the U.S. Marine Corps and U.S. Army.

Prior to assuming command at NSF Deveselu in October, 2014, Garren was the deputy assistant chief of staff for training and the Navy’s senior joint interface control officer (JICO) at Navy Air and Missile Defense Command in Dahlgren, Va.

NSF Deveselu is located in south-central Romania in Olt County, near the city of Caracal. When completed, about 200 U.S. military, government employees and contractors will work here.