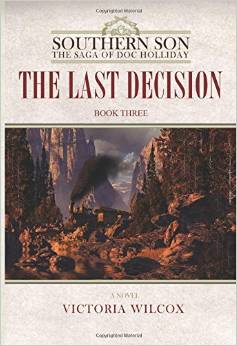 Award-winning author Victoria Wilcox will launch “The Last Decision,” book three in her trilogy “Southern Son: The Saga of Doc Holliday” Saturday, May 30, from 6-9 p.m. at the Twisted Taco on the square in Fayetteville.

“The Last Decision” is the culmination of 18 years of research on Doc Holliday, who was born in Griffin with family connections to Fayetteville. Knox Robinson Publishing, New York and London, released the book May 5.

The launch party is also a benefit for Fayetteville’s Holliday-Dorsey-Fife House Museum, once owned by Dr. John Stiles Holliday, uncle of the famous Doc Holliday who played there as a child.  Proceeds from book sales will be donated to the Museum. Omega Book Center in Peachtree City will supply the books.

Complimentary appetizers and desserts will be served on the Rooftop Patio, courtesy of Doc Holliday. The Twisted Taco is at 115 Glynn Street South. The celebration is free and open to the public but reservations are requested at DocsLadie@aol.com.

“The Last Decision” is the final volume of the historical novel trilogy “Southern Son: The Saga of Doc Holliday,” which offers a fresh literary look at an American legend whose years spanned some of the most exciting events in American history. From the Old South to the Wild West and the edge of the modern era, Doc Holliday’s story has it all – and it’s never all been told until now.

Wilcox was recently featured in the Fox Network’s new series, “Legends & Lies: The Real West” as the historian on Doc Holliday. She became a nationally known expert on the life of Holliday through researching and writing the Southern Son saga. In 2014 she was honored as Georgia Author of the Year for “Inheritance,” the first book in the trilogy, and is a frequent speaker at conferences around the country. “Gone West” is the title of the second book.

For more information about Peachtree City resident Wilcox, visit www.victoriawilcoxbooks.com. Signed copies of Wilcox’s books can be purchased through Omega Books at 770-487-2283.