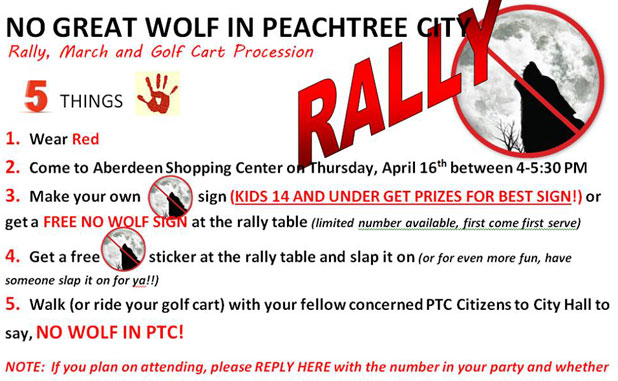 Opponents of a variance and rezoning that would allow a water park on the current Dolce conference site on Aberdeen Parkway in Peachtree City have planned a rally April 16, followed by a combined golf cart procession and march to nearby City Hall.

Peachtree City resident Mike LaTella posted a rally notice on the Facebook page, “Life in the PTC Bubble,” to notify opponents of the Great Wolf Lodge proposal about the demonstration set for next Thursday in Aberdeen Shopping Center between 4 and 5:30 p.m.

LaTella’s posts indicated the anti-Great Wolf rally would conclude with opponents marching and riding golf carts to City Hall, less than two blocks away, in time for the City Council meeting that starts at 7 p.m.

Persons interested in attending the rally and march were asked to respond to the Facebook posting or to send an email to ptcpride@bellsouth.net.

In a city email, Mayor Vanessa Fleisch has spelled out the rules for an extended public hearing that night that will give opponents and supporters an hour each to present their cases to the council.

Great Wolf Lodge Family Resorts wants to establish a regional tourist attraction consisting of an indoor water park and hotel resort facility on the 38-acre site of the Dolce Atlanta-Peachtree Hotel and Resort on Aberdeen Parkway off Ga. Highway 74 near the center of the city.

The proposal is receiving strong opposition from adjacent neighborhoods. At least 500 residents have signed an online petition against the proposed rezoning.

The city’s five-member Planning Commission on Feb. 9 voted unanimously to recommend that the rezoning request be denied after hearing from a standing-room-only crowd from all five villages of the city that overwhelmingly opposed the location of a major tourist attraction adjacent to residential areas.

The hot-button issue could have political ramifications: Two of the five council posts — currently represented by Mike King and Eric Imker — are up for election this fall.

A report by Georgia Tech’s Enterprise Innovation Institute (GTEII) concluded that with “nearly half a million visitor nights expected at full operation, it is estimated that the economic impact of the Great Wolf Lodge on Fayette County would be more than $75 million and would generate nearly 770 jobs across the economy resulting in more than $20 million in local personal income.”

In terms of the impact on local government and revenue generated, the report states the Great Wolf would have a fiscal impact on Peachtree City estimated at $24.4 million over the next 15 years and, in Fayette County, an estimated impact of $2.9 million.

The difference in impact between the city and county comes from Peachtree City’s 8 percent hotel-motel tax that would apply to the nearly half million visitor nights, the report said. 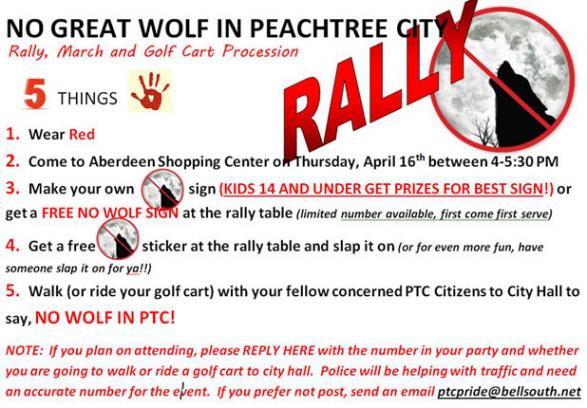