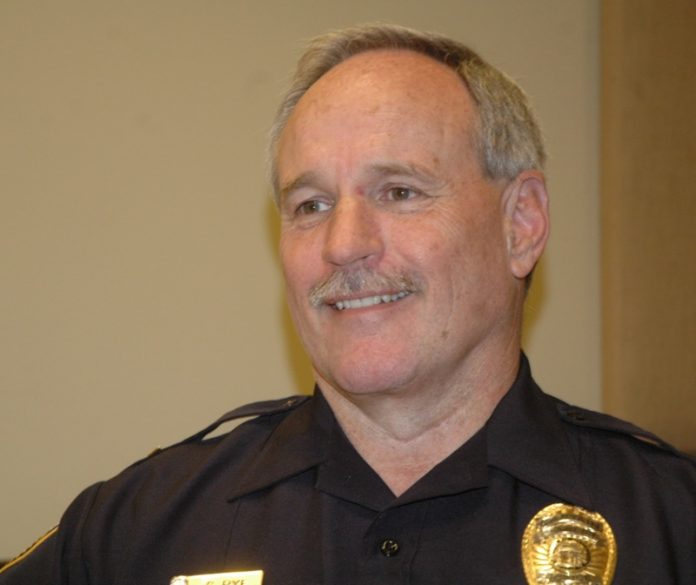 Peachtree City has begun the search for the replacement for now-former Police Chief William McCollom. The city website is advertising the position with a annual salary range of $84,377 – $126,506.

The resignation of Peachtree City Police Chief William McCollom was announced on March 11. The resignation followed an investigation by the Georgia Bureau of Investigation (GBI) that began after the accidental shooting of the chief’s former wife Maggie McCollom in the early hours of New Year’s Day in the couple’s home.

Peachtree City Manager Jim Pennington said the city will begin a search for a new police chief immediately. In the interim, Captain Stan Pye, who has been serving as acting chief since Jan. 1, will remain in that position, Pennington said.

McCollom in his resignation letter said, “It was my pleasure to serve with the men and women of the Peachtree City Police Department in the capacity of Assistant Chief and Chief. The City of Peachtree City has every reason to be proud of their police department as the personnel are both competent and professional. I wish each of them the best as they continue to serve the citizens. I have had two families in Peachtree City – my police family and my personal family. In light of the recent tragedy in my personal family, I need to continue to focus my time and efforts there.”

Pertaining to McCollom’s letter of resignation, Pennington said, “I know the (City) Council joins me in thanking Will for his service. He and Maggie have our best wishes and heartfelt prayers as they focus on her journey back to health.”

Pennington also cited the response of the members of the police department in the time following Jan. 1 incident.

“The members of the department have continued to do an amazing job amid the national publicity, speculation and negativity toward law enforcement that this tragic accident has generated over the past two months,” Pennington said.

“The community as a whole has been extremely supportive. We have experienced an overwhelming show of support and I speak for the members of the department when I say that we appreciate the time you have given us to begin the healing process,” said Pye.

Chief McCollom had been on paid administrative leave since the Jan. 1 shooting.

The GBI conducted the investigation on the incident where Maggie McCollom, 58, was shot in the back early New Year’s Day as she slept in the couple’s home at 103 Autumn Leaf in south Peachtree City.

Chief McCollom told a 911 dispatcher just after 4 a.m. that his 9mm Glock service handgun was in bed with the couple and accidentally fired when he “went to move it and put it to the side.”

McCollom in the 911 recording released Jan. 2 said his wife had been shot. McCollom said he had shot her accidentally and asked for medical assistance ASAP. Asked where she was shot, McCollom said she was shot in the back.

Maggie McCollom was released from Atlanta Medical Center in mid-January after being admitted in critical condition on Jan. 1 and had shown continued improvement since that time.

Fayette County District Attorney Scott Ballard announced last week that he will be seeking an indictment of reckless conduct against Chief McCollom for the Jan. 1 shooting. Ballard said there is no evidence to suggest that the shooting occurred intentionally.

Ballard said Maggie McCollom is still at Shepherd Spinal Center and is paralyzed from the waist down and has experienced numerous complications.