The Citizen
Friday, April 3, 2020
Sign in
Welcome! Log into your account
Forgot your password? Get help
Create an account
Create an account
Welcome! Register for an account
A password will be e-mailed to you.
Password recovery
Recover your password
A password will be e-mailed to you.
Home Opinion Columnists Ernst’s sister-in-law now a senator
Facebook
Twitter
Pinterest
Linkedin
For a conservative like me, Obama’s State of the Union speeches severely test a strong stomach. But the Republican response televised Tuesday night was a brilliant ray of sunshine, delivered by Iowa’s new Republican Senator, Joni Ernst. This exciting new Republican Senator is the sister-in-law of Terry Ernst, member of our own Peachtree City Council.
Many Republicans like me have high hopes that Senator Ernst will shake up the GOP establishment with a tiger’s energy and fresh views of a strong woman.
She is no stranger to leadership: She is an Army National Guard lieutenant colonel commanding the 185th Combat Sustainment Support Battalion at Camp Dodge, Iowa. She may be the only female senator ever to have served her country in uniform and in a war zone.
Terry Ernst and his wife, Joan, squeezed in a trip from Peachtree City to Washington, D.C., to attend the Jan. 6 new senator’s swearing in by Vice President Biden in the U.S. Senate Chambers, and later had the opportunity to tour the White House.
The accident-prone Vice President was surely doing his best to get all the new names right, but he didn’t disappoint his critics when he congratulated Terry Ernst’s brother, Gail, on his career as a Marine.
While Marines should be proud of their service, they will appreciate the blunder since Gail is a retired Army Ranger and command sergeant major. Rangers and sergeant majors are also fiercely proud of their achievement, and the Vice President did not escape polite correction this time.
As a candidate, Joni Ernst ran a TV ad about growing up castrating hogs on an Iowa farm. She drew a parallel to Congress where there is a desperate need to cut pork. She said about the hogs in Congress, “Let’s make ‘em squeal!”
She won an improbable victory against a Democrat machine that had owned that Senate seat for more than 30 years, and with the Senate selecting her as their spokesman to counter Obama’s presentation she just might get an early start making the opposition squeal.
Millions of eyes will be on Senator Joni Ernst, none with more pride than at the home of Terry and Joan Ernst here in our own town.
[Terry Garlock occasionally contributes a column to The Citizen. His email is terry@garlock1.com.]
Below, Terry Ernst (L) with his sister-in-law, Joni Ernst at her swearing in as senator. Photo/Submitted. 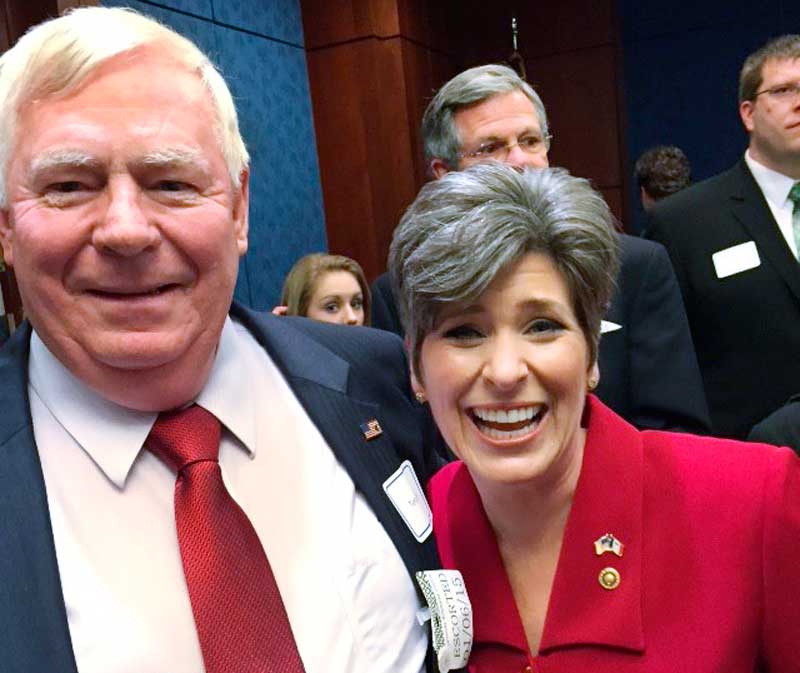