A crowd of about 100 witnessed the dedication Sunday of the Founders’ Corner in Peachtree City’s City Hall Plaza as the busts of city founders Joel Cowan and Floy Farr were unveiled along with a plaque highlighting their influence over the young town’s growth nearly 50 years ago.

Farr, who died in 2006, was a long-time resident and banker who helped bring electrical power to the county by working on the board of directors of Coweta-Fayette EMC. He also has been lauded for helping finance many of the city’s original businesses and homebuilders.

Above, right, (L-R) Jerry Petersen, Gordon Fleming, Hollis Harris, Frances Meaders, Sallie Satterthwaite and City Clerk Betsy Tyler pull the curtains off busts of the two men considered to be the founding fathers of Peachtree City: Joel Cowan and Floy Farr. Left inset, Joel Cowan speaks to those assembled for the ceremony on the grounds of City Hall May 4. Photos/John Munford.

Cowan served as the initial developer for the city and also as its first mayor. He was a guest speaker at Sunday’s ceremony, but he put the credit of the city’s founders on the residents who cast their lot with the city in the early days.

“I call them settlers because that’s virtually what they were,” Cowan said. “It’s one thing to choose a home based on shopping being near and a school and that kind of thing. But when you come out here and there was no four-lane road now or even promised, no essential utilities, no school, no shopping and yet you came anyway, that was a leap of faith.”

Those early pioneer settlers did more than occupy the city, they also set the tone for the future, Cowan said.

“They came with that spirit in mind, and I say that is what put the culture — that we still enjoy today — on this city. And I think that’s what made it great now,” Cowan said. “Not for what I did but for what was done later, and that’s the important thing.”

Cowan said one of the reasons the road frontage wasn’t used was because the city fathers didn’t want rapid development. It also helped in a way to tuck things from normal view, Cowan added.

“It was my goal when you turned off the road, you found something. … that was the reasoning behind that,” Cowan explained.

In the early going, one building served as the city’s bank, church, library, post office, and later housed the police department and city hall. Cowan said the church was initially known as Peachtree City Chapel and worshipers came from many different faiths. That church was important to the city’s early beginnings, along with the formation of the Rotary Club of Peachtree City, which still touches lives today, Cowan noted.

Below, Joel Cowan speaks to those assembled for the ceremony on the grounds of City Hall May 4. Photo/John Munford. 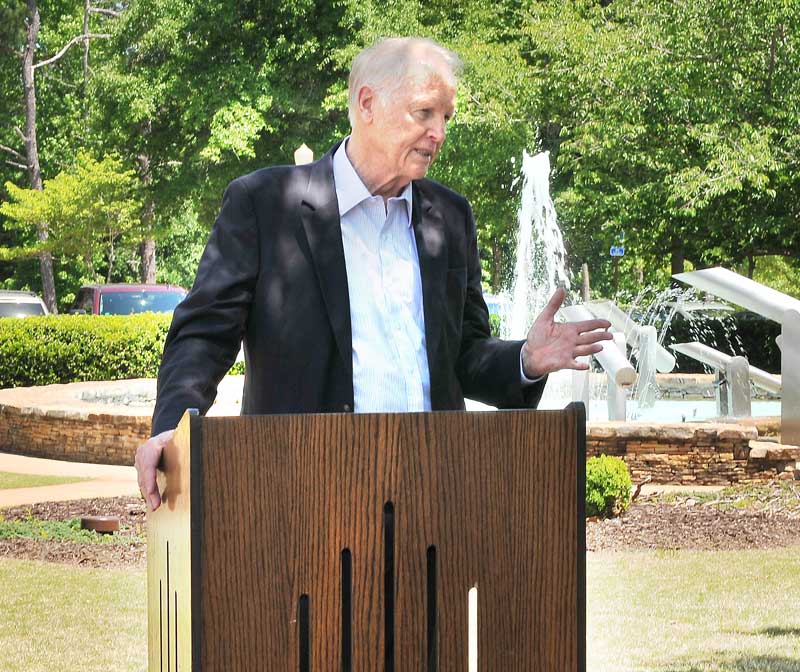 “The people, you, that’s the critical element,” Cowan said. “Buildings can be built and rebuilt and so on, but that leadership with civic involvement is the most important in my mind.”

Another Peachtree City resident with deep roots in the city, Scott Bradshaw delighted the crowd with tales dating back to when the city as we know it was a collection of farmers in the unincorporated county, most of whom were descendants of the original pioneer families.

Back in the 1940s and ’50s, as Bradshaw worked on those farms, there were two stores where one could stop and grab a rest, some eats and even a story or five.

One of the stores, operated by a man Bradshaw knew as Mr. Collier, included visitors such as farmers Walt Banks and Mr. Greer, and it was common for Bradshaw to have a lunch of vienna sausage with an RC Cola there, Bradshaw said. Visitors sat on homemade chairs and cola crates, and there was “always some interesting discussion there.”

The second store was known as Brown’s Store and was well-kept in large part because the owner’s wife worked there “and she made sure that things were done in the right way,” Bradshaw recalled.

“In fact, she had some rules. And one of those rules was — I remember it very clearly — that you were not allowed to spit tobacco juice on the floor,” Bradshaw recalled, drawing laughter from the crowd. “That just was not tolerated!”

Bradshaw also recalled the prohibition era and the moonshining that went on way back when. Many people thought it was OK to make moonshine, and even a series of sheriffs pretty much ignored the practice, though the state revenue department took it seriously.

There were a number of Sundays that Bradshaw had to take to busting up stills that appeared on his family’s land, he said.

“There were two rules: Rule number one was do not do your moonshining on your own land; sneak on somebody else’s land so if the revenuers make a visit they didn’t come to your house,” Bradshaw said. “Rule number two was: don’t get caught.”

The Founders Corner is the cornerstone of the History Time Line project conceived to mark the city’s 50th anniversary. Funded completely by donations, the project will extend from Founders Corner along the sidewalk with bronze plaques commemorating major milestones through the city’s history and each mayor’s years of service.

Contributions may be mailed with checks made out to The City of Peachtree City (please write “History Time Line” in the memo portion of the check) and mailed to the city at 151 Willowbend Road, Peachtree City, Ga. 30269.

Below, Scott Bradshaw regales the Founders’ Corner dedication audience with stories from the days before Peachtree City became a city. Photo/John Munford. 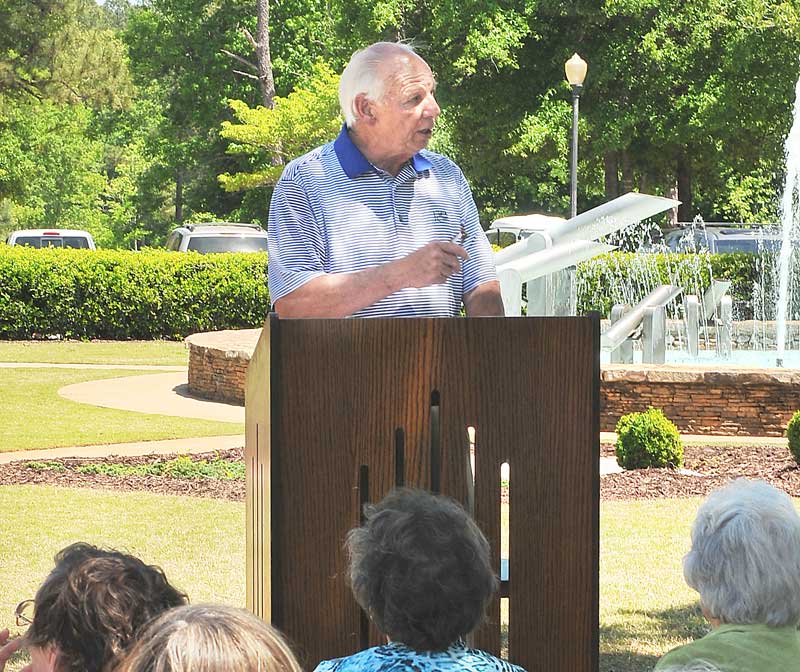