It took more than two centuries, but the British Union Jack is flying again on Fayette County soil. That flag, along with the American flag and the job site flag designating the various developers, was hoisted last week to the roof of one of the soundstages at Pinewood Atlanta Studios in a “topping out” ceremony to signify the placement of the tallest portion of the 65-foot building.

Project representative Rick Halbert, of Promaker Development, said developers assembled at the site last week for the “topping out” ceremony for one of the large soundstages on the property where the last truss was lowered by crane onto the top of the 6-story-tall building. Flying atop the large structure was an American flag, the British Union Jack and the job site flag containing the names of the project’s developers.

Above right, aerial photo shows the construction site before the roof went on the soundstage. Photo/Special.

The impromptu ceremony came as the year is winding down and the preparations for the first production at the new Pinewood Atlanta Studios continues to ramp up in time for the January opening.

Between now and the studio’s opening in January a second 45,000 sq. ft. workshop will be constructed. This one will also house office and production spaces, a 5,000 sq. ft. screening room and edit bays.

Another project to be completed by January will be the construction of a 45,000 sq. ft. Home Depot built specifically to serve the Pinewood site’s future needs.

Still other additions coming in the next two months will be the construction of 20,000 square feet of office space, which will be attached to one of the soundstage buildings and 3,800 sq. ft. common space on each of the two remaining soundstage buildings, Halbert said.

The 288-acre Pinewood Atlanta Studios property is situated along Veterans Parkway and Sandy Creek Road and is part of 1,200 acres recently annexed into Fayetteville.

The studio is expected to be operational in January, in time for the first production to get underway. Though the name of the film has not been announced, studio vice president of operations Brian Cooper said in September the movie will be considered a “tent pole” feature, in reference to what moviegoers usually call a blockbuster, that will be a $150-$200 million production.

Below, another aerial view of the three soundstage buildings and the separate workshop. Photo/Special. 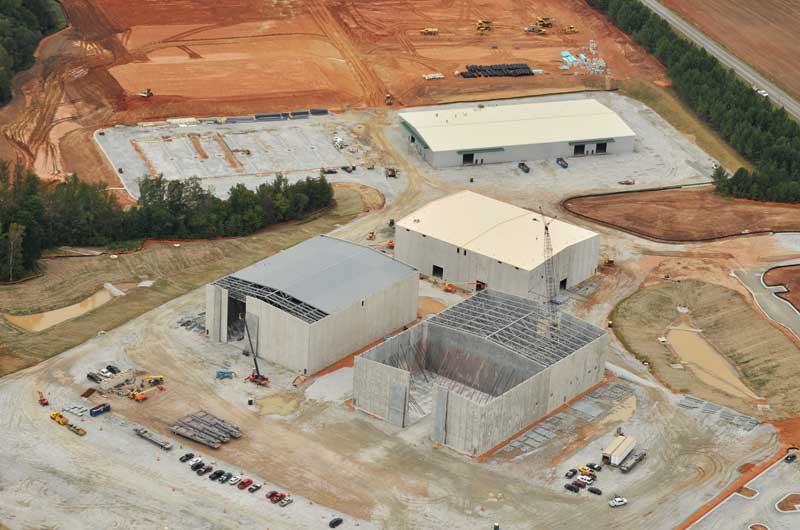