A packed house of Senoia voters Thursday heard from the three candidates vying for the mayor’s seat to be decided in the Nov. 5 election. Councilman Larry Owens, Senoia Downtown Development Authority (DDA) Chair Suzanne Helfman and retired Col. Don Rehman responded to questions in the forum hosted by the Senoia Forums Group and sponsored by the Senoia Area Business Association.

Candidates squared-off on a variety of questions on topics such as establishing the Senoia Development Authority to address citywide economic development, a common vision for the city, their greatest challege during their first year as mayor and how they would manage increasing business and residential growth and accompanying traffic concerns.

The candidates were asked their opinion on the recent proposal to the City Council to form the Senoia Development Authority.

Helfman in her response said she would support such a move, adding her belief that the authority would focus on bringing industrial businesses to the city.

“I think it’s a good thing and will help lower the tax rate,” Helfman said.

Owens in his response said the idea behind the proposal was to promote and recruit businesses that would not interfere with downtown businesses. 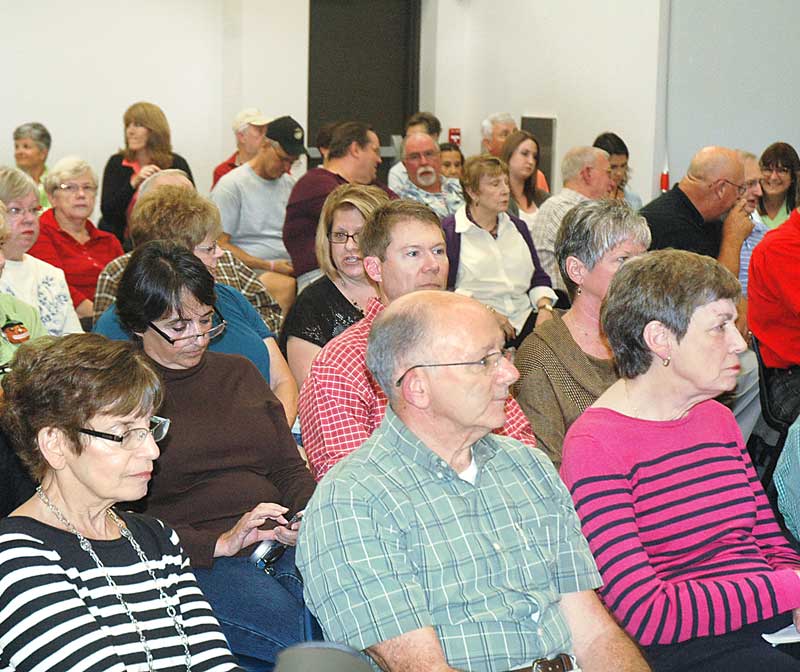 (Left, part of the crowd at the Senoia forum. Photo/Ben Nelms.)

Rehman, too, supported the concept though he was disappointed how the proposal came about.

“There was no general call to the public,” Rehman said, adding his hope that the authority, if established, would provide full knowledge of its plans to the public.

Candidates were also asked if there is a single common vision for the city that meets the different interests of the community, a vision that would unite citizens.

“Everyone can unite behind health and safety. These are paramount,” Rehman said. “We have a diverse population (in areas such as the historic district and the city’s subdivisions). I don’t think we could come up with something that all can support. It could be objectionable to some citizens.”

Helfman disagreed, suggesting a common ground exists among citizens in areas such as the preservation of the city’s historic charm, quality of life and well-planned growth.
“Downtown is the crown jewel,” she said.

For his part, Owens said there is no single unifying vision, noting that he preferred to focus on what has been developed to date.

“Downtown is a unique place and it promotes growth in other areas (of the city),” said Owens.

The candidates in a subsequent question were asked what their greatest challenge as mayor would be during their first year in office.

Helfman said that challenge would be to assess city services and to “make sure services are in place to accommodate current and future projects.”

Owens saw his greatest first-year challenge as city water and the water supply.

“Water is a significant issue. We need to make sure we can provide quality water now and in the future,” Owens said.

Rehman took a different approach in his response, one that is rarely addressed.

“I want to fill this room with the same number of people here tonight,” Rehman said, referencing the capacity crowd in the room that holds 80 people. “We have non-involvement in government affairs. We have to create an environment to draw people here.”

Another forum question centered on the 20-year Comprehensive Plan that is up for renewal next year. Candidates were asked about one thing in the plan they would add or change.

Helfman said some portions of the zoning ordinance should be reviewed for potential changes to keep Senoia unique. An example of that review should be the arterial roadways leading into the city.
Owens noted that the plan is reviewed every five years, adding that there is nothing specific at this time that requires review.

“The comp plan is designed to allow for review and citizen input every five years for potential changes,” Owens said.

In his response, Rehman said he had already attempted to get the council to work on one issue pertaining to one of the residential zoning categories but to no avail. His reference involved Rehman’s request in 2010 to have the City Council consider amending the zoning that applies to subdivisions and to require specific designation for facilities such as churches and daycare centers that, by ordinance, are allowed in those zoning districts. The council concluded at the time that the matter would best be considered during the 2014 renewal.

Candidates also fielded a question asking how they would manage both positive growth and the increasing traffic that will accompany that growth.

“The city has done a good job maintaining that balance,” Owens said. “We have to look at what’s being proposed and how it fits with the community.”

Owens said he was not in favor of big-box businesses, including on highways 16 and 85, as they would disrupt the sense of community.

Rehman followed, saying Owens’ comments “sounded great, but it worries me that we keep annexing property.”

Rehman questioned whether the city would be able to afford the annexations, adding that the city should be knowledgeable but cautious.

Helfman said she would prefer to see planned growth rather than positive growth.

“And that planned growth must be done well,” she said, adding that the city is self-sufficient and that people move to Senoia for the small-town charm it affords.

Another question dealt with visitor parking for major events and the increasing problems caused by large numbers of vehicles. The candidates were asked if they would support the purchase of additional property for parking space.

Owens said the council previously purchased property for additional parking and he would support adding more parking space for general use.

“Parking is an issue that needs addressing further,” he said.

From Rehman’s perspective parking has been an issue that could be addressed in a different way. Suggesting a different philosophy, Rehman said the city might consider shifting away from on-ground parking and moving to multi-story parking that would be “somewhat hidden from view.”

From her perspective, Helfman said she would not support acquiring more space for parking given that there are only two major events each year where parking is a problem.

“Parking for merchants is a concern,” Helfman said. “But I wouldn’t have multi-story parking. It wouldn’t fit with our (downtown) charm.”

Yet another question asked if the recent move to lower the millage rate was well-advised since the local economy and that of Coweta County is improving. Though not stated in the question, and by way of clarification, the city’s budget runs from January through December while the millage rate, by law, is adopted in late summer each year.

“I think it was a good decision and a fair one,” Owens said. “We met our needs without raising taxes and we kept the same level of service.”

Rehman in his response said he had always been confused by the process of setting the millage rate.

“We announce the rate then we do the budget, as if it’s politically motivated,” he said. “I think we should work to cut the budget, then establish the rate.”

Helfman responded saying the millage rate was lowered because increased taxes were brought in and the city was in a position to lower the tax rate.

“No one wants to see (the millage rate increase) as long as city services are not being impacted,” Helfman said.

Owens has served on the City Council for 11 years.

Rehman served in the U.S. Army for more than 26 years and is a retired colonel.

Helfman has served with the Senoia Downtown Development Authority for 10 years and has served as chairman since 2006.