In Peachtree City, the construction of an additional pump station within the sewer system’s service area is a sign that new customers from two residential development projects are coming online on the south side of town off Ga. Highway 74.

The Peachtree City Water and Sewerage Authority recently completed its $525,000 Meade Field Regional Pump Station 36, which is fully operational following inspection and testing before coming online by Labor Day weekend. The construction project took a little longer than the anticipated 120 days for substantial completion, due to unusually rainy weather; but the work was done within budget, says Stephen Hogan, PCWASA General Manager.

Since the WASA Board of Directors awarded the low bid of $525,851 to Willow Construction during a special called meeting on March 20, the Authority and its contractors had to overcome some unique challenges during the project, said Nathan Brooks, PCWASA Construction Manager. For starters, at the location of the pump station, crews found a high level of ground water while excavating, requiring a pump to withdraw the water from the site for the duration of this phase of construction.  In addition, the work had to be coordinated with local athletic associations while the parking lot for the Jim Meade Memorial athletic fields was disrupted.

The Meade Field project not only included construction of the regional pump station, but the installation of more than 4,500 linear feet of 6-inch high-density polyethylene (HDPE) force main and 2,400 linear feet of 8-inch polyvinyl chloride (PVC) gravity sewer, as well as 12 sanitary sewer manholes.

Hogan says the Meade Field pump station initially will serve customers of two new residential developments, while enhancing the availability of sewer, which is preferred over septic systems in the city.

The first new development is a property of Southern Pines Plantation Commercial Group, LLC.  “The Gates” is a planned 90-lot single family residential subdivision, featuring a recreational area, open space, and cart paths. The development also includes two parcels for office/institutional development at the intersection of Highway 74 and Redwine Road.

The second local development to be served by the new pump station is a senior living rental community envisioned by Dominion Senior Living of Peachtree City, LLC.

Dominion, in a joint venture with Harrison Street Real Estate Capital, began construction on “Somerby at Peachtree City” in October of last year. This community is located at the intersection of Highway 74 and Rockaway Road and is designed to provide assisted living and memory care to senior citizens of Peachtree City and the surrounding communities within Fayette County.

Hogan says that the Meade Field pump station project is a case study of a “win-win” for private-public partnerships between developers, such as those backing The Gates and Somerby, and utilities, such as WASA. The parties are sharing the costs of bringing this critically important sewer infrastructure online, as outlined in the development agreement adopted by the Authority, which accompanied the award of the low bid at the PCWASA March called meeting.

“The Authority and its customers will reap the benefits of the revenues from sewer services that will be coming from these two properties for many years to come,” says Hogan.  “Not to mention, there could be additional customers coming on board in the future now that sewer is available in this area.”

Below, the Meade Field Regional Pump Station 36 (pictured during one of its earlier stages of construction) initially will serve sewer customers from two new residential developments in Peachtree City – The Gates and Somerby at Peachtree City. Photo/Special. 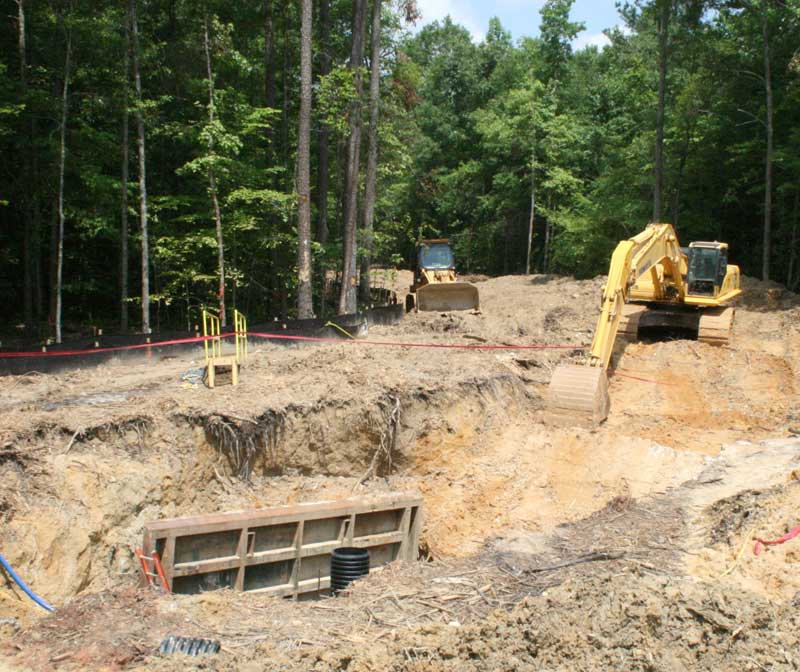