When a 12-year-old boy shot some “Silly String” at the Fayette County Democratic Party’s July 4th parade entry, it touched off a brief verbal confrontation between the boy’s dad and Fayette County Board of Education Chairman Leonard Presberg, who was marching with the Democratic entry.
Both Presberg and the boy’s father, Gary Wax, said they never came to blows, but they accused each other of trying to start a fight.
In the initial email to The Citizen about the incident, Wax did not seem to know who the man was who confronted the boy (see letters on Page A4).
Presberg contends the child sprayed the Silly String in the face of someone carrying the Democrats’ balloon sculpture touting President Obama, and that when the boy returned to the crowd Wax gave his son a high-five.
That differs from Wax’s account of the event, as he said he did not see where the Silly String landed. Wax did not mention high-fiving his son afterward, but said his son had deployed the Silly String earlier in the parade as he shot friends who were riding by on floats.
The college student who was hit by the Silly String said the shot actually glanced onto him because the boy had shot the banner he was carrying. Shae Brooks of Peachtree City said he simply wiped off the residue and kept on walking.
Because his son already had sprayed other parade entries, Wax didn’t think it was a big deal until he saw Presberg making a beeline for his son. Wax said he stepped in and the two men were “nose to nose.”
“I could literally smell his breath, that’s how close he was to me,” Wax said. “… I kept saying, ‘Move on, move on, move on.’”
Presberg in an interview agreed that Wax continued to tell him to “move along” a number of times before Presberg walked away.
“I went over and said, ‘That was really rude,’ or something, and the dad basically got in my face and said, ‘You can’t tell my son what to do,’” Presberg said.
Wax estimated the entire confrontation lasted 15 or 20 seconds at most, and that he kept telling Presberg to walk away.
When Presberg walked away, Wax said the school board chairman told him “Man, you need to get your priorities straight.”
Presberg said he felt the Silly String was a physical attack and said it caught him by surprise.
“That was pretty disturbing to me, and the fact that the initial reaction was not ‘hey, don’t spray (stuff) in people’s faces’ but ‘hey, that was really funny, good job!’” Presberg said.
Wax noted that his son might have been one or two steps off the curb when he shot the gooey substance.
“It wasn’t like it was an attack or anything,” Wax said. “It could never have been considered to be such.”
By Presberg’s account, the parade marcher who was struck by the Silly String wiped it off and kept on marching.
Presberg said he realized it was just a joke played by a 12-year-old kid, but he didn’t think it was funny.
“I get it: kids do stupid stuff,” Presberg said. “But it’s how the adults around react to what a kid does. And when a kid does something like that, in my mind, it’s just clearly inappropriate. The appropriate reaction is not a big high five.” 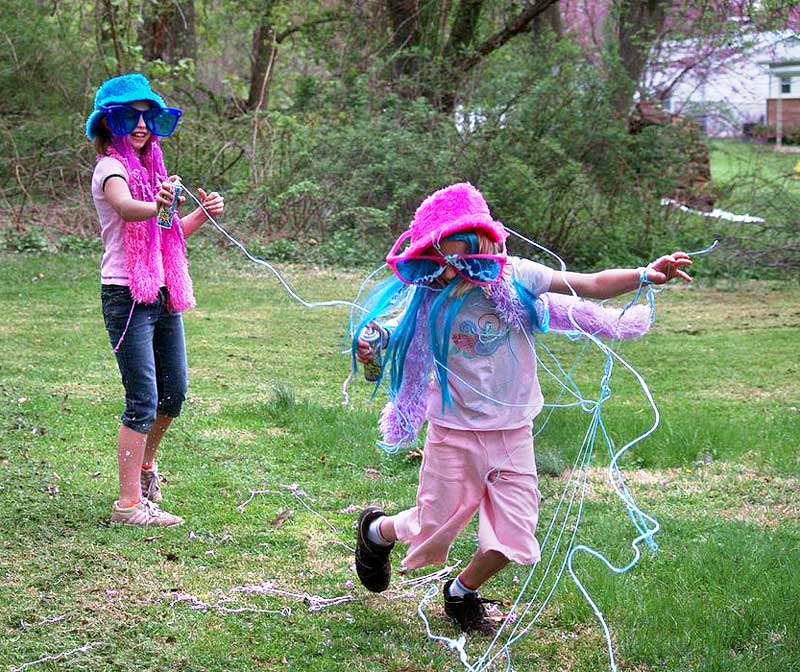 Wax said he was concerned about not getting in a fight on July 4th in front of his children.
“That was the last thing you think of, getting in a situation where you’re going to have to fight somebody,” Wax said. “It was very intimidating and the more I thought about it, the more I thought ‘this is total b.s.’”
Presberg noted that in addition to boos and jeers from some in the parade, others threw candy at the Democrats marching in the parade.
“I got hit a couple of times from people throwing stuff, which just seems crazy to me, that our society has sort of degenerated into if you disagree with someone, it’s OK not to treat them as a person,” Presberg said.
According to Wikipedia, “Silly String (generically known as aerosol string) is a children’s toy of flexible, sometimes brightly-colored, plastic string propelled as a stream of liquid from an aerosol can. The solvent in the string quickly evaporates in mid-air, creating a continuous strand. Silly String is often used during weddings, birthday parties, carnivals and other festive occasions.” The resulting strand is nearly weightless.