[ADDENDUM and update follows below this column.] — In the aftermath of last week’s momentous votes by the Fayette County Board of Education, I’m still puzzled.

First, the four members of the board in early November interviewed seven volunteers for the opening on the board created by the Sept. 22 death of Post 5 member Sam Tolbert.

By mid-November, they made their choice unanimously: Leonard Presberg.

At the first meeting in the new year, members Janet Smola and Terri Smith — herself a former chairman — voted with Presberg to install him as chairman of the board. Then-Chairman Bob Todd and member Marion Key voted against Presberg.

During the same meeting the board voted 3 to 2 — Presberg, Smith and Smola against Todd and Key — to capitulate to the NAACP in the voting rights lawsuit pending against the board. [CORRECTED SENTENCE — See below.]

Here’s my review of that astonishing series of events.

First, the board was being sued so that a black Democrat would have a better shot at being elected to the board. Shuck it all down, and that’s what the lawsuit was about.

Standing before the board in early November were no fewer than four black candidates for the open seat.

Inexplicably, the board chose to appoint a white male, Presberg, to the post. No explanations, no public input, no recourse.

As it turns out, not just any old white male either. Though such information showed up nowhere on his résumé, Presberg is a staunch Democrat, who expects to be listed this fall on the special election ballot as a Democrat for the Post 5 seat.

An interesting side note also nowhere to be seen on his résumé (as under hobbies or interests or such): Presberg is an apparent charter member of an organization called the Fayette Freethought Society. The organization was formed in February 2010; Presberg joined in April 2010.

Presberg just weeks before being appointed to the Board of Education volunteered his home for the freethinkers to screen a freethinker’s documentary film, “Godless.”

According to the Wikipedia entry, “In the United States, ‘freethought was a basically anti-christian, anti-clerical movement … .’”

In the sense that every person should be free to think what he/she desires, I too am a freethinker and here’s what I think, freely.

So what we have here is a man who has never held elective office appointed to a school board in a mostly Republican county on the buckle of the Bible Belt.

Within two months of that appointment, he is chairman of the board that controls $180 million in Fayette County public tax money to pay 3,000 public employees and educate 21,000 Fayette children.

And in this Bible Belt Republican county, our new unelected school board chairman is both a Democrat and a member of a militant atheist organization, a man who could never have hoped to be elected to public office in this county, simply because he is so unrepresentative of the vast majority of Fayette voters.

It’s likely that all 133 members of the Fayette Freethought Society would shout in unison that such a man as Presberg is just what the ignorant majority of us need, for our own good.

Under the old qualifier, “some of my best friends are … (fill in the blank),” we’re not talking about your garden variety village atheism here. We are talking about in-your-face, proselytizing atheism, which seeks to banish all trace of the great monotheistic religions from every square inch of the public square.

These are not live-and-let-live, mind-your-business-and-I’ll-mind-mine true nonbelievers. No, these folks deeply believe that most of us religious folks (mainly of the Christian variety) are just simply stupid and that our stupid religion should be ridiculed as myths.

They hold in pure contempt what most of us in Fayette County consider to be holy. They reserve their highest contempt for Christians who dare to proclaim their faith.

I feel betrayed by the four sitting members of the board of education. Is this the best they could do?

And for the two board members — Smith and Smola — who elevated this neophyte to a position of public power without any public scrutiny whatsoever, what is their excuse?

For my atheist friends who are foaming at the mouth at this point, I’m NOT talking rights here. I agree with my atheist friends that any adult citizen of Fayette County has an inalienable right to life, liberty, the pursuit of happiness and to be elected to public office.

That’s the rub: Presberg slid in under the radar. He was not elected to anything by Fayette voters.

And then he provided the clinching vote to snatch away four-fifths of ALL Fayette voters’ rights to elect their five-member school board.

Because of Presberg, Smith and Smola, never again will Fayette voters get to vote for all five members of their board of education. [CORRECTED SENTENCE — See below.]

And thanks to Smith and Smola, the man sitting atop the public school system in Fayette County is a charter member of an organization that considers the worldview and religious beliefs of most Fayette Countians to be contemptible.

How should the stupid majority feel about that? Grateful to our intellectual betters?

ADDENDUM Jan. 19, 2012: Here is one screenshot of the Fayette Freethought Society website, taken before the site was altered recently, and from which I derived the information that the group was “founded Feb. 25, 2010,” and that one of its founders was Al Stefanelli, one of two persons who listed their full names.

The screenshot from the original website presentation (prior to the site’s alterations) clearly says “founded,” it clearly says that founding occurred in February 2010 and it also clearly lists Mr. Stefanelli as one of its “organizers.” Draw your own conclusions as to what information the site itself presented to the world at large on its fully publicly accessible pages (at that time).

The site itself, of course, has since been altered so that the information in this screenshot differs from what appears on the site now. Draw your own conclusions about that. 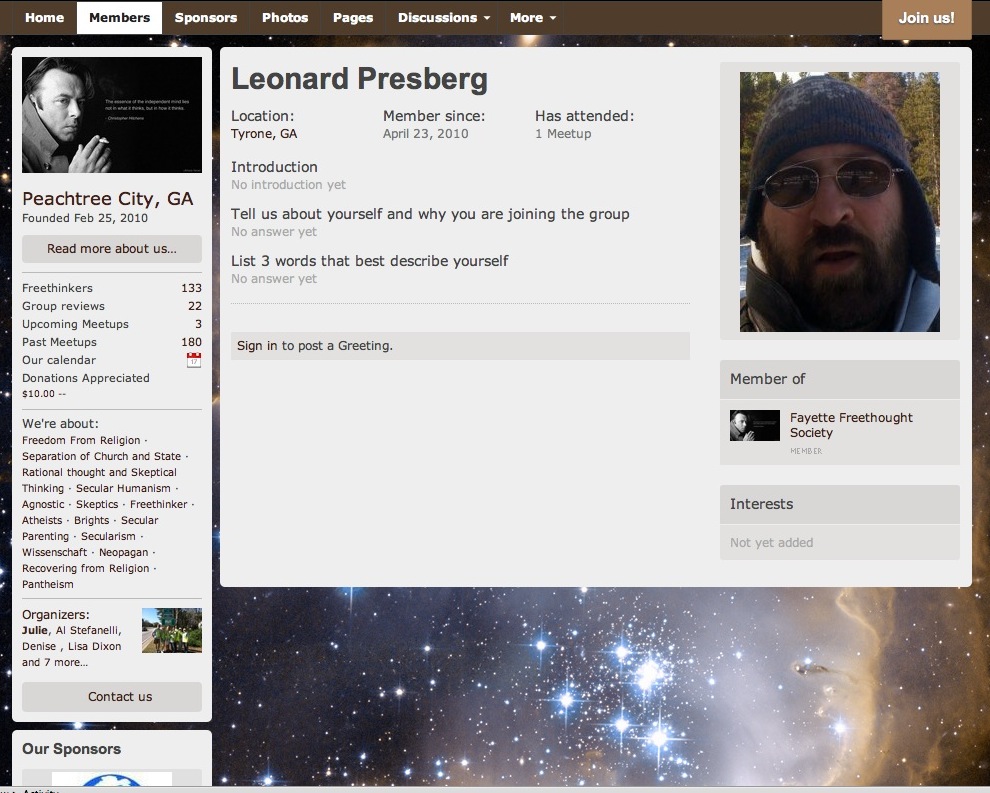